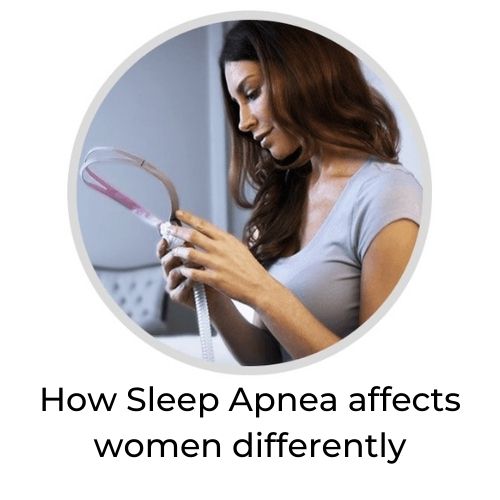 Like with many health conditions, women can be affected differently compared to men. This is the case with sleep apnea, which affects around two or three times1 as many men as it does women. It’s only in recent years that more attention has been paid to the role of gender in sleep apnea, but research has revealed that the gap in rates between men and women closes more the older women get. One study revealed that an estimated 6% of all ages have moderate or severe sleep apnea, with another 5% having a mild form of obstructive sleep apnea. By the time they reach menopause, 20% of women may have sleep apnea.

An estimated 1 in 4 women2 in the United States has a high risk of sleep apnea. Of those who have it, up to 90% could remain undiagnosed. Women with sleep apnea will often display symptoms such as snoring and fatigue during the day. However, many women take a long time to see their doctor about these symptoms. The signs of sleep apnea can be more subtle in women than in men, which may be one reason that many women are likely to remain undiagnosed. Women’s symptoms don’t always conform to the classic signs of sleep apnea, so the condition may be missed.

Some of the most common symptoms of sleep apnea in women include:

As these symptoms can also be shared with a variety of other health conditions, they are often attributed to other causes. These can include depression, anxiety, thyroid conditions, fibromyalgia, menopause, and more. Sleep apnea can occur alongside these conditions or contribute to their development. Sleep apnea itself often goes unrecognized, which might mean women receive the wrong treatment because the underlying condition hasn’t been diagnosed. There are also some risk factors specific to women, such as pregnancy, polycystic ovary syndrome (PCOS), and menopause.

Women might take longer to discuss the symptoms of sleep apnea with their doctor simply because they do not have the typical symptoms. Although they might feel fatigued, they might not raise the issue if they are not snoring or noticing any difficulty sleeping. Some women might report that they wake up3 gasping or choking for air, or that they wake up but are unsure why.

There are other reasons women might not report their symptoms4. Some might view snoring as “unladylike” or unfeminine, and don’t want to mention it to their doctor. Women are also more likely to attend a medical appointment on their own, whereas men will often attend with a partner, who can report symptoms they might not notice or neglect to report themselves. This, combined with the more generalized daytime symptoms often reported by women, can mean that diagnosis of sleep apnea takes longer for women compared to men.

It can be difficult for women to recognize the symptoms of sleep apnea, and even for their doctors to diagnose it. However, when both women and their physicians know what to look for, sleep apnea can be diagnosed and treated.